Emotional Intelligence in the Workplace

Many people believe that intelligence, or IQ, was what determines success. But, researchers have found that people with average IQ’s outperform those with higher IQ 70% of the time. It turns out that the missing link in determining a person’s long-term success is emotional intelligence, or EQ.

Many organizations make the same mistake by focusing on developing hard skills, while the truth is that soft skills, such as emotional intelligence, have been demonstrated to be the strongest predictor of job performance. Plus, high levels of EQ in the workplace creates more rewarding, collaborative, and satisfying workplace relationships, which, in turn, leads to reduced stress and anxiety and greater productivity.

Talent Smart studied 34 important workplace skills, including emotional intelligence, and found that EQ was the highest predictor of work performance and overall success.

Another study of over 40 fortune 500 companies found that programmers in the top 10th percentile of EQ produced software 3 times faster than programmers with low EQ, and high EQ sales representatives outperformed others by 50%.

Studies have found that high EQ also correlates to increases in earnings, problem solving skills, and leadership effectiveness. In fact people with high EQ make an average of $29,000 more a year than those with low EQ. This has proven to be true across different industries. Plus, it reduces conflict which has been shown to increase retention rates by 67%, saving both recruiting and training cost.

The good news is that emotional intelligence can be DEVELOPED!

In this course, you will learn how to:

Then, once you’ve developed awareness of and control over your own emotions, you’ll explore how to handle other people’s emotions and develop better communication and stronger relationships with your co-workers or staff. You’ll learn how to:

So who are we?

We are Joeel & Natalie Rivera. We own a digital media publishing company called Transformation Services, Inc. We provide training programs and curriculum development for entrepreneurs and small businesses. We also run a magazine and live events and conferences. We’ve worked with 40,000 students, coaches and businesses from 170 countries. All of our programs are created based on over a decade of experience in education, business development and coaching, as well as my background in psychology, including my Master’s in Counseling and Education and my research on happiness for my dissertation for my PH.D. in Psychology.

Investing in EQ could be the best investment you ever make in your organization. Here are several examples of why.

After supervisors in a manufacturing plant received training in emotional competencies, such as how to listen better and help employees resolve problems on their own, lost-time accidents were reduced by 50 percent, formal grievances were reduced from an average of 15 per year to 3 per year, and the plant exceeded productivity goals by $250,000 (Pesuric & Byham, 1996).

In another manufacturing plant where supervisors received similar training, production increased 17 percent. There was no such increase in production for a group of matched supervisors who were not trained (Porras & Anderson, 1981).

The US Air Force used the EQ-I (Emotional Quotient Inventory, Multi-Health Systems, Toronto) to select recruiters and found that the most successful recruiters scored significantly higher in the emotional competencies of assertiveness, empathy, happiness and emotional self-awareness. They found that by using EQ to select recruiters, they increased their ability to predict successful recruiters by nearly three-fold. The immediate gain was a saving of $3 million annually. In a large beverage firm, using standard methods to hire division presidents, 50% left within two years, mostly because of poor performance. When they started selecting based on emotional competencies such as initiative, self-confidence, and leadership, only 6% left in two years. The executives selected based on EQ were far more likely to perform in the top third: 87% were in the top third. Division leaders with these competencies outperformed their targets by 15 to 20 percent. Those who lacked emotional competencies under-performed those that did by almost 20% (McClelland, 1999). 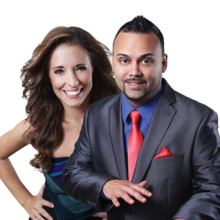 Joeel and Natalie Rivera are a dynamic duo, as a husband-and-wife team, partners in crime, and BFFs! They are freedom junkies and prolific content creators who have been coaching, speaking, writing, and teaching for more than a decade.

Joeel is a former psychology professor with a Master’s Degree in Counseling and Education and is currently completing his dissertation on eudaemonic happiness for his Ph.D. in Psychology. Using the science of psychology and human potential, they train leading edge entrepreneurs, leaders, life coaches, and individuals how to master the power of their mind and create their destiny.

They’ve taken what they’ve learned through their successes and (most importantly) failures, and today they run a powerhouse education and publishing company.

JOEEL’S BEGINNINGS: From an early age, Joeel faced adversity, including failing his first year of college and losing his brother to a car accident at the age of 19. This experience transformed his life and instilled a deep sense of purpose by inspiring him to give his brother Daniel’s name a meaning by helping others find their true path.

In 2009, he fulfilled his dream of opening a youth center in honor of his brother. Shortly thereafter, life called him a different direction and Natalie answered a Craigslist ad and took over his position of co-founder of this business.

NATALIE’S BEGINNINGS: After a decade of living a life that wasn’t authentically hers, and developing Chronic Fatigue Syndrome as a result, Natalie let go of everything and completely transformed. Through her journey to healing, she rediscovered her true self and greater purpose—to be an entrepreneur and inspire others to transform their lives. Natalie “retired” from the rat race at 24, put herself through school as a freelance designer. Days before graduating college (finally) she answered an ad for a business partner running a non-profit teen center.

JOINING FORCES: While Joeel & Natalie met for only 30 minutes during this transition of ownership, two years later they reconnected and recognized how synchronistically the stars had aligned to bring them together. They joke of the irony of how they “starting the same business, just not at the same time” and they’ve been co-creating in life and business ever since.

JOINING THE INFORMATION AGE: Joeel & Natalie joined the information age and became INFOpreneurs in 2014 when they went “green” and transitioned their print magazine into digital format. They found they could reach an exponential, worldwide market at a fraction of the time and cost—and they were hooked! They closed their physical offices and began converting their in-person workshops and training programs into information products and online courses.

THE NIGHTMARE/BLESSING: Then, in 2015 they received a proverbial “kick in the pants” to go “all-in” to the online world when Joeel fell ill after traveling overseas. Natalie became his full-time caretaker and their businesses crumbled down around them. They decided they never wanted to be in that situation again, so they dedicated themselves to converting their training, coaching and speaking programs into online courses that would outlive them. Their new business model is based on investing in “the new real estate”, which is creating passive income through building a portfolio of educational content.

Today they have 150,000+ students from 195 countries. They are passionate about sharing their story and inspiring entrepreneurs to monetize their passion and knowledge in this new digital education economy.

Welcome and Getting Started
04:38

Emotional Intelligence in the Workplace
17:43

New Being an Emotionally Intelligent Manager
10:00

We suggest moving this party over to a full size window.
You'll enjoy it way more.
Close
Go Fullscreen